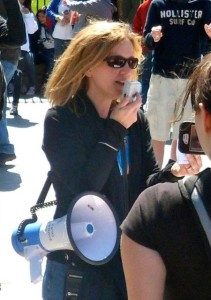 Peggy Robertson has taught in the public schools for 19 years in a variety of capacities and holds a master’s degree in English as a Second Language. She taught kindergarten, first, second, fourth, fifth, sixth grade, and has also served as a literacy coach, literacy interventionist and an educational consultant. In 2015 she was the recipient of the CEA Lion Advocacy Award. The University of Arizona awarded her the Kenneth S. Goodman In Defense of Good Teaching Award in 2016. Her teaching position was eliminated in May of 2016 and she is currently working from home as a writer, tutor, and chicken herder. She is married with two boys and resides in Denver, Colorado. Prior to joining BustED Pencils she blogged at www.pegwithpen.com.

“All indications are that labor has been caught unprepared for a President Trump and a GOP-controlled Congress and Supreme Court. With such broad control over every branch of government, Trump may be able to not only roll back many of Obama’s accomplishments, but also change the face of labor law for decades to come.” –… Read more »

The Protectors of Humanity #NoDAPL

Day 6 Nov. 7th, 2016 It’s the day before the election.  I’m at Standing Rock – where life is real – people are real, and work is pure – and at the end of the day you feel that you did something good. Even when we look at the humvees planted in the hills, or… Read more »

Nov. 6th, 2016 Last night we went to the casino in order to make a mad dash to upload all blogs, pictures, social media, etc., that each of us has promised to various organizations and groups.  When we returned it was after eleven p.m. Sam and I crawled into our tent exhausted. We had been… Read more »

November 5th, 2016 Today we ate breakfast and headed to back to the Front Line to deliver the shields. As we cross over the bridge into the Rosebud camp we are immediately told there is a direct action today. Not sure what it is, but hoping we will hear more. We head on to the… Read more »

Front Line – November 4th, 2016 Today we went to the front line – this is the camp that is closest to the digging of the pipeline –  but the front line has been pushed back – and they are trying to inch their way back to the digging. We visited with women and men that… Read more »

I’m a Colonizer but I feel the Sacred Part II

Day One continued at Oceti Sakowin Camp #NoDAPL I continue to hear stories. Another tribe is the Crow tribe.  They came walking four miles to the camp  – coming in “healing” and wearing  full tribal dress.  The Crows were previously hated because they gave up the Native Americans to the army years  ago, but now the… Read more »

I’m a Colonizer but I feel the Sacred. by Peggy Roberston

BustED Pencils is proud of our own Peggy Robertson who is now on the ground in North Dakota and participating in the #NoDAPL grassroots movement.  She will be submitting blogs via cellphone.  With the help of friends, we (BustED Pencils) will make sure that every word from that sacred location gets to you. I’ve been… Read more »

Emotions are running high these days due to ESSA opportunity. If the powers that be get their way, they will steer these emotions right where they want them, into the hands of the .01%. Don’t believe me?  Let’s do our best to get up to speed. But I have to tell you, two pots of… Read more »

Opt Out is DEAD

In its current form. Did I get your attention? Good. Because right now I feel like I back peddled five years ago to the time when several of us started an FB page to create opt out guides/resources for each state. At that time, we/opt outers were mocked, ignored, and ostracized. Lots of big wig… Read more »

It never fails – when I share my TLAC blog I am always presented with the Teach Like a Champion argument that “some good things can be found in there.”  For the love of god this argument makes me insane. Yeah, so maybe someone found one little good thing in there – but at what cost to… Read more »

Breakfast on the Floor. Poof. Gone.

On August 10th I posted a blog detailing the breakfast situation at my former school, Jewell Elementary. Feel free to read to catch up. Within less than 24 hours of posting the blog the breakfast policy was changed. Poof. Gone.  Social media is very useful in exposing bad policies, which then require people to acknowledge the… Read more »

I am a white privileged girl living in the suburbs. That being said, I have my own experiences with power structures, and many that have occurred via my activist work, in my personal life, and via my teaching in the public schools. I want to share a few today in the hopes that thinking through… Read more »

Children, Eat Your Breakfast on the Hallway Floor at School

As you all know by now, I am no longer working at Jewell Elementary in the Aurora Public School District. However, I was recently alerted to a new  policy regarding breakfast at the school. The school day starts at 9:25 a.m. This year, if children want to eat breakfast they must get there at 9:15… Read more »

I am voluntarily    X Resigning as an employee of the Aurora Public Schools for the following reasons: My position at Jewell was eliminated. In addition, Jewell no longer is a healthy working environment (for teachers or students) and I would not be able to work there unless we were able to return to our… Read more »

Reimagining EVERYTHING in education and hope for a “freedom from harm.” Guest: Maika Yeigh