Emotions are running high these days due to ESSA opportunity. If the powers that be get their way, they will steer these emotions right where they want them, into the hands of the .01%.

Don’t believe me?  Let’s do our best to get up to speed. But I have to tell you, two pots of coffee later I’m not even close.  First, take a look at ESSA (Every Student Succeeds Act). ESSA demands an additional indicator of student school or success – more or less, an indicator tied to emotion.

“(v) (I) For all public schools in the State, not less than one indicator of school quality or student success that—

“(bb) is valid, reliable, comparable, and statewide (with the same indicator or indicators used for each grade span, as such term is determined by the State); and

“(cc) may include one or more of the measures described in subclause (II).

“(II) For purposes of subclause (I), the State may include measures of—

“(V) student access to and completion of advanced coursework;

“(VII) school climate and safety; and

“(VIII) any other indicator the State chooses that meets the requirements of this clause.

Over the weekend I watched the NOVA special on the Future of Our Schools. If you haven’t seen it, you simply must. There’s a lot embedded in this two hour show that I’m still trying to pull apart – but I’m only going to focus on one aspect today.

The little blurb for the show states, “How can the science of learning help us rethink the future of education for all children?”  Nothing alluding to emotion at this point.  Of course there’s a big focus on ALL children – and science, my friends, will get us there.

It begins with the usual suspects, Linda Darling-Hammond busts out first with a statement about inequality being our Achilles heel. She’s followed by Kahn who wants us to have an “equal shot regardless where we are born.”

It all sounds great.  Really feel good stuff. And then it gets moving. The narrator wants us to discover how science can give all children this so-called equal shot – not food, not shelter, not equal access to books, democratic classrooms, libraries, fine arts – nope, science will get us there.

The next message goes like this – don’t ask kids to beat the odds, use science to change the odds.

They follow up with a pretty strong statement. They state: Our brains aren’t wired to learn to read.

Stephen Krashen states, “There is a lot of evidence that shows that reading is natural.  We learn to read the same way we acquire language, by understanding messages.  Also, in print-rich societies, everybody with access to print learns how to read, unless there are serious neurological or psychological problems.”

So, based on what Dr. Krashen is saying, equal access to books, librarians and libraries might solve this problem, huh?

Yet, nope. No need for that. Because we have SCIENCE. And……..there are ways to change the brains of children in order to level the playing field.

Really???!!!! Who knew that scientists could-should-and-would manipulate the brains of children – but okay – BRING it NOVA.  Oh they do. Just wait.

They soften us up by talking about the perils of poverty. They do seem very concerned and compassionate. So concerned that they want to figure out a way to help children not be distracted by the stresses and distractions which come with poverty, such as violence, hunger, lack of shelter, fatigue – all those distractions that make it difficult to learn.  They decide that science, and specifically looking at and altering the way the brain works, will solve this problem.

So – in a nut shell, they have no plans to protect children from poverty, they intend to keep making money off children in poverty, and they will alter their behaviors and emotions to make sure they can make even more money – all the while, keeping these kids in check, under control and compliant – AND they are going to make them LIKE IT…or at least appear as though they do. Got that?

Just in case you don’t, they have examples of how they plan to do it.

For starters, they show a little boy wearing headphones listening to a story during which they interject a second story on another speaker, making it difficult to focus on the first story. Next, they emit random noises from an additional third source.  Meanwhile, the child’s head is all wired up as they watch his brainwaves.  They want to see if the child can focus on the first story with all these distractions! You know, kind of like gun shots outside your window might be a distraction from doing your homework, while you stand in eye’s view of the window, cooking dinner for your younger siblings? No worries – these kids are going to learn how to deal.

They have another young child in a Head Start preschool where she is asked to play “Dr. Distraction” – where she walks along a strand of yarn while not dropping a plastic frog held on a spoon, all the time children on either side banging sticks to distract her. Sounds like a relaxing day in preschool doesn’t it? The goal is to strengthen the “architecture of the brain.” Everyone applauds her when she is done.

They throw in a small segment about giving children stickers at home as a reward for doing tasks – the child gets a sticker for waking up – hey, gotta start the day out right.  No thinking needed, just do as told and you will be rewarded as those in charge see fit – let’s make sure that behavior modification exists in all shapes and forms in all areas of life.  Good parents. Good child. Pat on head. Get use to complying.

NOVA shares that children’s brains are malleable – and if we just focus on the neuro-plasticity of the brain, we can make this work! The goal being – better learning while ignoring poverty.

ESSA helps. Emotion is important in better learning – especially if you can control it and use it to create specific learning behaviors. With daily online curriculum, daily online testing, which targets a child’s emotions and behaviors, well folks, it’s the ESSA opportunity that just keeps giving. Data point after data point – now moving from academic skills to the child’s feelings and consequential behaviors – all allowing the corporations to get more information on each child in order to shape, form, and direct the child’s future.  When a child’s emotional response and/or behavior does not match the needs of the market and/or the system, they can use science to alter a child’s brain, consequentially shifting the emotional response and behavior – always being sure to reward the child for complying.

They are even discussing adding “blue” light to high school classrooms because it appears blue light reduces the fatigue that most high school students feel due to crazy early morning schedules. My own son has to leave at 6:45 for high school. Apparently if he had blue lighting in his classroom he would wake up more quickly and come home and sleep earlier – therefore, requiring the student’s natural sleeping rhythm, hormonal changes, to shift and accommodate the needs of the school and corporate profit. I wonder what the long term impact for my son’s health might be in a situation like this?

In regard to the push for online learning, they use an emotional appeal to target the audience. It appears that contact with humans is frightening – it’s scary to have to learn in front of people! Children feel like failures!  The child in the show is trying to work on math with the father and freezes up. When the father leaves and the child gets on Kahn Academy the child relaxes and figures out the math problem. I’m sure every parent watching NOVA was tapping into a memory of that one teacher who humiliated them in class.  Learning online is easier than actual face to face contact with human beings because it reduces pressure.  And the child feels better working online because they get points for success!!! Always reward them – compliance is key.

Everywhere children go they will get points it seems. At home. At school. Oh yes – and when they enter the workforce they can transition to badges – welcome to serfdom, worker bees! You will be successful at following directions and complying to the demands of the .01% – even if you’re tired, hungry, or sick.

I was sharing all this with a dear friend, Morna McDermott, who then sent me this link – Boosting Kids’ Brain Power with electric currents. It is indeed a brave new world.

In addition to watching NOVA, I’ve also been researching GEF, the Global Education Future. Emily Talmage has an excellent summary of them here, in which she states who they are: a group of wealthy elites from around the world who, in addition to giving presentations to one another about ways to make money off of our schools, quite literally get together to map out the future for our children. 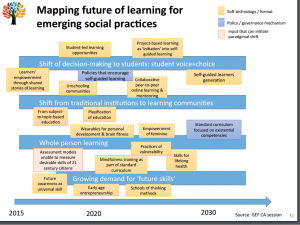 After looking at the map from GEF, I’d say that we are right on track, with ESSA’s help of course, to hit their 2035 goal.  Opt out in its current form is as dead as a doornail – time to regroup and shift our approach to encompass a larger understanding of where we are headed – parents need to know and begin to plan to refuse all online curriculum and testing.

As GEF states in the “mapping future of learning” diagram, the input necessary to shift the paradigm, is indeed a focus on assessment models that cannot measure desirable skills of 21st century citizens (see pink boxes). Desirable skills of 21st century citizens, which clearly include compliance with a smile, demand much more data than PARCC or SBAC can ever bring forth. The formation of compliant worker bees demand access to a child’s social and emotional data, which ESSA is happy to provide and NOVA is happy to promote.