Last night we went to the casino in order to make a mad dash to upload all blogs, pictures, social media, etc., that each of us has promised to various organizations and groups.  When we returned it was after eleven p.m. Sam and I crawled into our tent exhausted. We had been going nonstop all day long.  As I crawled in I heard the drum circle and the singing once again. I thought to myself about how ridiculously beautiful this is. Now that I am accustomed to the temperature at night, and I am comfortable in my tent, it’s almost like mother earth is singing me to sleep. The singing was then followed by the cry Water is Life (in English) –  which then bounced like a raindrop twenty tents over where some cried out Mni Wiconi, bouncing again 30 tents in a different direction…..Mni Wiconi, and so it goes, over and over, and I drifted off to sleep, very grateful.

I woke this morning to a packed camp. I noticed yesterday that people were piling in for the weekend. But this morning, it’s clearly full. I am told that 3,000 people are here during the week and that it rises to approximately ten thousand on the weekends, which explains why my attempts to charge my phone and computer at Media Hill were absolutely futile on Saturday. As I sat and drank coffee by the fire this morning we heard music over at camp security. Our camp is right next to the camp exit where security stands 24/7. A man, soon to be known as Peter, had stopped there in his car and turned on his radio and started dancing. I went over and joined and then filmed a small clip. It will make you smile. And it was a great way to start my morning.

After finishing breakfast by the campfire my son yells for me to hurry. There is a group headed into the Morton County Memorial Courthouse for a peaceful protest. We decide to go.  I hadn’t gone into town for any protests and I was interested to see what might transpire.  We drove what seemed to be a good hour, finally arriving at the courthouse and linking hands all the way around the building. I was at a corner of the building, and oddly enough, found myself linking hands with people from Colorado on both hands. My understanding of the protest was that we were there to make it clear that we must all forgive, we must all come in peace together, in order to regain our humanity and to protect the water. It was a beautiful protest, followed by some beautiful thoughts from Lilah Johnson.  Lilah discusses how she came to organize this peaceful protest today. She looked to her sisters in Ferguson, Missouri.

In some ways this protest was hard for me, hard to slow down, hard to simply be still and meditate with peaceful thoughts….I wanted to get back to camp – there were things we needed to do. I’m a city girl, I move fast, I get things done real fast, and that’s not necessarily always the right or most helpful way to be. Sometimes it’s important to just be present. I was reminded of that today where I was forced to stop, breathe, and simply hold hands in silence.

As we headed back to camp we stopped by a horrific sight – it truly makes me choke up viewing it. It was a portion of the Dakota Access Pipeline. It was like someone had taken an ax to the earth – yet they didn’t stop with one chop. They were merciless. They hacked again and again and again. They hacked over the hills, in a murderous way, leaving the earth exposed and wood planks had been pounded into the ground to demand compliance. They then had taken that now all too familiar barbed wire that I see at Standing Rock – it flows in circle after circle to bind off an area from anyone who might feel the need to stop their cold and calculated progress. We took pictures. Dawn, a member of the Penobscot tribe, and a Green Party member, gave me some tobacco (asemaa) and told me to toss it to the earth and say a prayer. Again, forcing me to slow down, forcing me to go within, and think deeply about what I do, and why I do it.

So I did. I stopped and thought. I stopped moving so fast. And I breathed.

I watched my son climb down into the Dakota Access Pipeline and I tried to imagine what he might feel and think, as his generation will see and know the consequences of this more than I ever will. 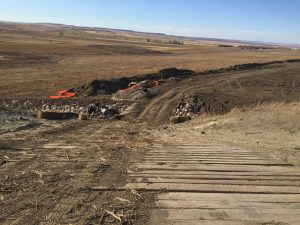 I took pictures, listened to car horns of support as they drove by, and then  I climbed back into the van to head back to camp.

I’ve been here four days and there has been no wind. None. In all the videos previous to coming here it was blustery. Today – there is wind. Immense wind. The flags are all flying high, including the United States flag positioned in the sign of distress. We are now back and I’ve climbed into our van to type before I forget all the things that have transpired. It’s impossible to type outside.  It’s 2 pm.  Sam sits next to me in the van doing homework so that he doesn’t get behind. We have people that stop by our camp to tell us they are voting for Jill Stein. They love our Green Party Banner.  We love being here. 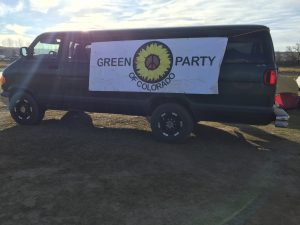