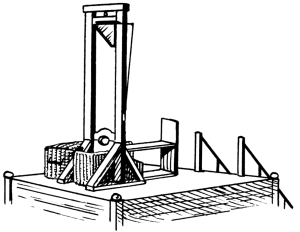 This week we witnessed how amazingly fragile the test and punish paradigm really is.  Teachers were proclaimed criminals for cheating on high stakes standardized tests.  Why?  Not because they are truly criminals. Rather these teachers are now criminals to serve as a warning to those fighting the test and punish system.

Our test and punish system of education reform will not be tampered with and any attempt to do so will result in the harshest and most severe punishment.

My question:  Why does test and punish reform need to practice such “public beheadings?”

Really? Are we truly surprised that educators actually “cheated” on high stakes standardized tests? Why? What harm was caused? Well according to a report by Christina Samuels in Education Week, “The result was inflated test scores that led to thousands of children being denied the remedial education they were entitled to, state officials said Tuesday. ”

Oh now I get it. This “cheating” resulted in children not getting what they deserve. Well what exactly do these or did these children deserve? If the answer is a “remedial education” that is standardized (sanitized), did the children really lose out? Who really lost?

From my perspective, the biggest losers are market-based reformers. They tried to use high stakes tests as a stick in order to take control of the Atlanta system of public education. Make no mistakes, reformers are responsible for creating a climate of fear, and this climate of fear drove normally ethical people to behave unethically. However, now their sacred data is tainted! They can’t use it to close down schools or remove ineffective teachers and administrators for failing to meet some arbitrary target that may or may not be an indicator of learning. Of course teachers and administrators are going to lose their jobs for “cheating”, but should they?

Get it.  The “cheaters” revealed that test and punish is simply a charade that maintains the status quo and keeps destructive social and economic systems of power in total control. Once again, in 2011 I wrote:

Although these educators engaged in unethical behavior, they revealed the one thing education reformers fear most — the system being used to dismantle public schools has an Achilles’ heel.

What’s the one thing the market-based reformers hold sacred? What’s the one thing the entire high-stakes testing regime can’t live without? Data! The destructive system (high stakes testing) must collect reliable and “objective” data. Data is the gasoline that powers the engine of reform. Without it the entire system shuts down. Why do you think there is so much “disbelief” at cheating on state exams? Why are so many education officials like Secretary Duncan “shocked?”

It has nothing to do with being surprised that it was happening. Cheating and gaming the system were guaranteed outcomes of this pernicious system — Campbell’s Law.

They’re upset because their plan for dismantling the entire system of public education is totally reliant on the appearance of “objective” measures. The system that supposedly informs taxpayers about the quality of their local schools needs “objective data” — test scores. Without these “objective ” test scores the list of draconian sanctions mandated by reformers cannot be applied to community-based public school systems. Once the data is tainted, it can’t be used. It’s that simple.

It’s pretty simple to understand why the Atlanta teachers were “beheaded” publicly.  They set in motion the possibility that “others” might question the entire test and punish regime.  They exposed a system that redistributes wealth away from children and teachers and proves the failing public schools narrative to be simple propaganda—propaganda that blames the victims and rewards a deceptive system that has drained untold resources from public schools.  Strict compliance and obedience coupled with the most severe punishment is the only way to protect the illegitimate data.

Because once data is seen as illegitimate, invalid, bogus, junk, bull, worthless, test and punish education reform is exposed as a fraudulent system, responsible for harming millions of children and communities.

How do we proceed? Sabotage?