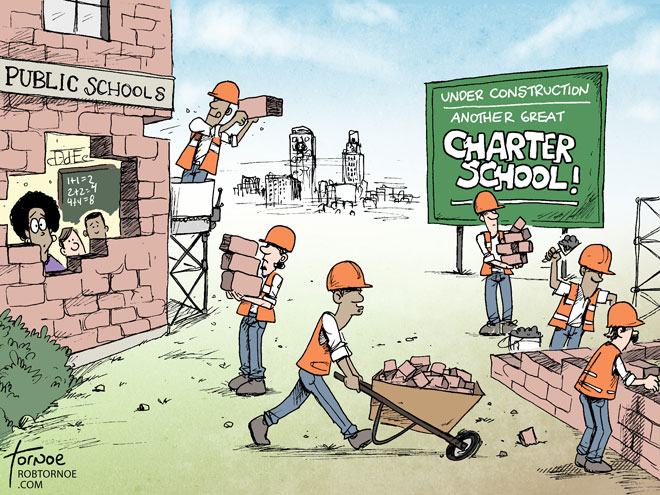 Wisconsin State Journal calls “all” charter schools public despite the fact that the latest charter school grant received by WI is for “independent charter schools” that don’t answer to a locally elected school board.
These same charter schools create a funding dilemma for neighborhood schools by authorizing a “backpack full of cash” funding stream out of local neighborhood public schools.
And according to the Network For Public Education,
“by definition, a charter school is not a public school. Charter schools are formed when a private organization contracts with a government authorizer to open and run a school. Charters are managed by private boards, often with no connection to the community they serve. The boards of many leading charter chains are populated by billionaires who often live far away from the schools they govern.”
The WSJ’s motivation for misleading the public on this issue is suspect and its conflation with “district charters” and “independent charters” is obviously a calculated misdirect to take the heat off of a valid issue that needs clarity and not biased propaganda.
Teachers in real public schools know and feel the difference. Just ask them. We might be surprised to hear the truth about public education from those that work with our neighborhood schools on a daily basis—the experts.
And, after we talk to teachers, maybe, just maybe, we might stop relying on “edu” journalists that are either acting on explicit bias or just not simply informed on the issues at the heart of public education.