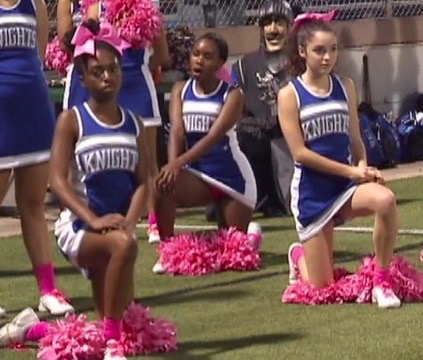 As a social studies teacher and critical educator, it is my responsibility to engage with the world, to analyze current events in a historical context. It is my job to challenge the dominant paradigms in the study of history or offer alternative perspectives. These issues constantly pop up in the classroom and we have to know how to deal with them with a nuanced multi dimensional approach. Students are watching and trying to interpret events, and what happens in professional sports trickles down to us at the high school site level, where students all over the country, including my own site are taking a knee and being met scornfully from administrators and community members alike.

I wish some folks would just say what they feel, I can’t even say white folks because some ignorant negroes are the same. I really doubt that they care about the flag this much. I just don’t understand that level of sensitivity for a flag, it’s borderline pathological. The real problem is the reason the players are taking a knee and the implications of it all. There are too many veterans coming out in support of Kaepernick and the NFL players for it to be about veterans. I have many vets in my family, even old school, country boy, Vietnam vets that support the players taking a knee. The language of patriotism is used to couch racist attitudes based on a mythological American paternalism.

They really have a problem with what taking a knee represents. It questions the legitimacy of the entire system, this so called democracy. The players are telling the world that they are not content with police murdering black people in the most egregious ways on film, and not being held accountable by simply taking a knee. This type of unruly behavior by Black people and the reaction that it elicits goes back to the founding of this nation. It challenges the narrative of America as a beacon of freedom for the world.

What They Really Mean
They are offended that we are not happy with what “America” has “bestowed” upon us. they think they let a few of us in some little club and we are ungrateful. That’s why they always bring up the “millions of dollars” the players make. Paradoxically, Black people are viewed as children that have been given everything, even though the opposite is true. ‘How dare they refuse to stand for the flag that has given them the opportunity to play sports for money’, they say. This fictitious view of African Americans as recipients of gracious opportunities that America has showered upon them is at the root of their perceived ingratitude. Black people were not even allowed to play professional football until the 50’s. It was the 1980’s before the NFL had their first Black starting quarterback, Doug Williams. Despite having to fight for every inch of progress, even in professional sports, they are expected to shut up and be appreciative.  Of course this mentality is not new. It goes back to the stereotypical ‘uppity nigger’ label attached to black people, either after emancipation, returning from a World War, achieving any notoriety, title or wealth that he/she thinks entitles them to any degree of equality or humane treatment.

If Americans were not so scared to tell the truth, we wouldn’t have to read between the lines of their rhetoric. Its not hard to see the racist vitriol through their thinly veiled words and attitudes. Anyone who knows history can see through the, ‘they make millions of dollars’, ‘they should be more appreciative’, ‘respect the flag’, ‘the veterans fought for your freedom’ type of nonsense. How did veterans fight for the freedom of Black people when the same people that sent them to fight, took away said freedom? These reactionary attitudes are as old as America itself.

They think Black people should have more appreciation for America and it’s symbols. America has given so much to civilize Black folks and bless us with ‘freedom’ and ‘democracy’. They ‘let’ us come from the ghetto and make lots of money playing a game so we should shut up or they may take it away. America is giving Black athletes and entertainers a chance to be the ‘good, responsible black people’, ambassadors to the world to show how great and harmonious America is. Public display of dissatisfaction is breaking the deal. We saw this with Paul Robeson in the 50’s, Muhammad Ali, John Carlos and Tommy Smith in the 60’s, they were publicly flogged and punished for their misdeeds, namely garnering international solidarity with the struggle of Black people. The privileges that come with mainstream acceptance for African American public figures comes with strings attached, ‘shut up and play’, ‘never speak up in the interests of your people’. If these conditions cannot be met, ‘back to the field’ like the days of old. This is the consciousness behind the president’s and much of America’s call to fire the “sons of bitches”. Now baseball players, hockey players and even German soccer players are kneeling in support of the NFL protests.

This visceral response of some segments of America to a relatively tame act is evidence that they just want Black people to shut up while cops have free reign to kill us. Where is their humanity? They are more offended by kneeling than Terence Crutcher, Laquan Mc Donald or Oscar Grant being murdered by cops for nothing. Kneeling during the anthem is the most passive and weak protest imaginable. It’s not even breaking a rule, its not disruptive, it doesn’t even make a scene and still, its too much for some to bear. This is what makes it so powerful at the same time. It speaks volumes about the sentiment of much of America. Even the most quiet, polite act of resistance strikes at a nerve and triggers a collective fear and disgust, disguised as an affront to their patriotic sentiments. Even the tiniest peep from those who wish to stand for the oppressed is unacceptable.

Any self respecting people would be ungovernable with what has been going on with Black folks here. If Whites thought the cops were more likely to shoot them because of their race, they would be armed in the streets ready to revolt. Greece went up in flames after the police shot an unarmed man. the same folks losing their minds wouldn’t be so mad if players took a knee for homeless vets, ocean pollution or anything other than Black people. If the NFL protest is legitimate, what does that mean? It means that their beloved American, meritocratic, democracy is a sham, a lie. Thus, taking knee is disrespectful, those taking knee are ignorant ingrates and whoever the police choose to shoot is a thug that deserves it, no matter how much reality conflicts with this imaginary world, it is a necessary illusion to protect their fragile worldview.

What bothers me more is the arrogance of it all. I know the protest is not against the anthem or the flag itself, despite what detractors may say but perhaps it should be, at least against the idea that black people, of all people, should be expected to stand for their pro-slavery anthem written by a racist slave owner in the first place or their enslaving, Jim Crow flag. They must be crazy. There is a fundamental misunderstanding of history that paints America as some benevolent civilizer of her African descendant, so-called citizens instead of the vile, violent exploiter that it has been. The response of much of America is based on this debased understanding of American history.


If the NFL tries to force these men to stand, I hope they all kneel en masse. I hope the situation escalates to just one team refuses to suit up. Ultimately that’s where their power lies. Our kids are watching and idolize these people. The players themselves, let alone the owners, are not worthy of our support, if they bend to this kind of fascist pressure. Taking a knee was a personal choice by Colin Kaepernick and was not meant to challenge us in the way it has. His conscience would not allow him to stand for the Anthem and a flag that oppresses Black people. However the situation has escalated and the only choice the NFL players have is to stand together or capitulate.