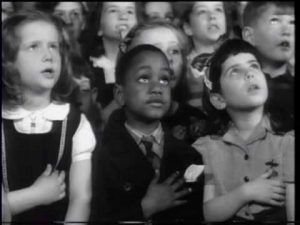 School is quite regimented and authoritarian. Students are told when they can use the bathroom or blow their noses. They are often asked what they want to be or how much money they want to make, but they are seldom asked what kind of world they want to live in and how they plan on contributing to it. Students have not been given the chance to imagine a world that is different from this one. They do not even question whether it should be different. They are taught to accept the world, its injustices and power structure as it is. It is something they are encouraged to fit into instead of challenge. Emphasis is placed on being college and career ready, which is fine, but to the exclusion of changing the world. They are taught to revere authority, but never taught to when it is appropriate to question those in authority. Teachers, counselors, administrators, even cops and security guards force a worldview and conduct that is restrictive and oppressive, which does not foster a culture of democracy.

Of course structure is important for children, however, there should be a gradual release of containment as they get older. The high school student is as regimented as the elementary school student except in the most trivial of ways. In fact, as they get older, the more they are feared instead of trusted. They don’t even know they are stifled. It’s all they know and they act out in class and towards authority figures. At best, they know how to shut up and follow directions. This has consequences beyond the class.

They actually believe that they have no constitutional rights because they are minors. Students are taught that they should be treated like criminals for their own good. We, as the adults stand by as they are illegally searched by cops and security. One time, I, as a new teacher consented to allowing cops in my room during instructional time to randomly search my students for drugs. Still, I am ashamed of my silence. I was still on probation and did not want to risk my position. The passivity training worked on me as well.

Another time, I had some anti police brutality activists in my class to talk to the kids. Many asked interesting questions like, “is it legal to protest?” Some cried as they told stories of how they and their families have been treated by police.  What I learned was how afraid they are of authority. We have kept them in a bubble, protecting them from participating in the political realm, even when they are victimized; we, for some reason, believe they have no place taking part in it. When thousands of Los Angeles students walked out of school for immigration reform in 2006, or when students from a local high school tried to leave to join a march, security measures were taken to lock the school down after school hours to keep them from participating. Activists leafletting the students after school had been intimidated by cops because, of course, children should not be exposed to the real world, only the fabricated world we give them.

Foul language and gang related talk and activity are tacitly accepted and unchallenged even by security and teachers as we walk across campus and witness it all. Gang related writing, graffiti and stickers decorate the school walls, perverted or drug related pictures on the front of t-shirts are all tolerated to some degree, but when the “We are all Trayvon Martin” and “Fight the Power” stickers started to appear on the walls, they were scrapped off immediately. All the while, I’ve been walking by the same tag on the wall every day since. The students engage in nonsense because it is the only permission they have to step outside the lines with the least consequence. Principled action outside the prescribed lines is unacceptable.

Structure for Order and Obedience, not Democracy

The freedom they are given is trivial. So is ours as adults, so it does make sense that we will reproduce those structures. School structures are undemocratic because the world we expect them step into is highly undemocratic. A school system that promotes democracy will unravel this whole fucking system. Work, where we spend much of our waking hours is authoritarian, most of us have no voice over our working conditions. In our society, we may be given some license or permission to engage in the activities we want, and we call that freedom. We little or no influence over public policy.

How does it benefit students to be told when they can go use the restroom? The fact is, we’re not preparing our students to participate in a democratic society because we don’t have one. We want to emphasize career and college readiness because we are educating them for the market not society at large. At best, we expect them to fit like cogs in a machine rather than questioning the legitimacy of the machine itself. The values most visibly encouraged are respect towards authority, nationalism, punctuality, ability to meet deadlines, organization, abstaining drugs and alcohol, not speaking out of turn, trying your best. All of these are good, but they generally seem to involve conforming to the status quo.

This affects our disadvantaged students who are routinely fed nonsense about the pathology of the poor. Minority students are not able to resist internalizing their treatment as potential criminals when black youth are treated as such as early as elementary school. All the dysfunctions of our society are reproduced, not challenged in our education system and the youth are expected to fall in line. In my class, I have had white students discuss how they are treated differently than minorities, athletes discuss how they are given privileges. There is no appropriate time for students to address injustice in school, even if face to face with it. Immigrant students and their allies at my school site were planning a campus speak out in the quad during lunch to discuss concerns of the prospect of a Donald Trump presidency. They didn’t even plan to miss class, but administrators rounded up the leaders and coerced them to call it off.

All this is accompanied by a social studies curriculum that shuns all forms of radicalism. In my extremely dated, district issued, US History textbook, Malcolm X is described as a proponent of violence. The Communists and Anarchists of the labor movement are all but written out of history, except as Haymarket bomb throwers. There is no critical commentary about any war or foreign intervention perpetrated by the United States. Every bomb that has ever been dropped is described as being done with benign intent. Any radical stance against American policy is somehow characterized as violent or irresponsible. In my experience most teachers perpetuate this view of history as well. As a result, there is not even a model of principled radical action against the ruling class that children can learn from, unless they have a teacher determined to provide one. In order for any social activism to be treated fairly in school text, it has to be non socialist, non violent and/or non threatening.

We are at the point where whatever we teach in schools, has to start from the premise that what we have been doing isn’t working. Hundreds of species are lost everyday, the oceans are dying, humanity itself is threatened. Students should be encouraged to imagine a different world. They have been systematically taught that this is the best of all possible worlds. Early in every school year I ask my US History students if Columbus’s “discovery” of America was a positive development. Most students say “yes”. This is not a problem in itself. However, when asked why, most say something like “Had it not taken place, we wouldn’t be here now”, or “we wouldn’t have the freedoms we enjoy”. As if living on the cusp of mass environmental catastrophe or nuclear annihilation are great developments, as if obscene inequality and state sanctioned murder by police is ok. If this system had any interests in actually educating youth to be independent thinkers, there would be some effort to actually teach them what’s going on, what must be done to change it and that another world is possible.

We should challenge our students to raise their voices, if we actually want to live in a democracy. As educators we should encourage a critical view of our history and our place in it. We want to channel the thoughts, feelings and ideas or our students into positive action even if it challenges the status quo. Academies, charters are all popping up claiming to encourage independent thinking and problem solving. They want education geared to the needs of the market. They want youth that can solve problems of production, marketing and maximizing profit not human survival. We want them to know formulas and theorums, document analysis, basic science but nothing tied to how the world actually works and how to change it. We want critical thinking, but only about how to solve the problems the system faces, not the system itself.