Oh what bender of hate, racism, and misogyny is our country on?

Let me begin with some background details about my main analogy here. I am a recovering alcoholic and drug addict. I’ve been clean for 25 years. I work “A Program”. One of the worst things I ever did back in college during the height of my drinking days, was on one occassion to wake up in the morning and find myself somewhere strange and next to someone even stranger. I didn’t know where I was or who that person was lying next to me. I’ve got enough decades between me and those days that I can speak about it openly. It’s been almost 30 years since I have had that sick feeling.

I woke up November 9th at 6:30 a.m, and suddenly wondered where I was, and who that horrible person was on the TV being pronounced as out next Commander in Chief. The nausea, the remorse, and the fear of what would happen next, the “what have we done?” set in. And, like the movie Groundhog Day, every morning I wake up since then I am re-experiencing that same feeling over and over… because the nightmare has not (will not) gone away. I had a lot of issue with many of Hillary’s policies and history. I am a card carrying member of the Green Party. But I never feared that if elected, she would completely and openly reverse every civil liberty (for people of color, gay people and women) that we have earned (at least on paper) over the last few decades with one, two, three strokes of the Supreme Court pen. Yes, I firmly believe we have (and had) a lot of problems with oppression and inequality pre–election day, but things are about to get a whole lot worse, not a whole lot better. Unless…..

As someone who practices a program of recovery I am supposed to “accept the things I cannot change”… that’s gonna be hard for quite a while. (I actually wonder if there hasn’t been an uptick the number of alcoholics who have relapsed since Nov 9th, or a rise in the number of people who will join my ranks and take the seat next to me next Thursday night.)

We have awoken with a destructive and disgusting hangover that will last a generation (assuming we make it that far).

And we will have a long road to recovery ahead. So I have to focus on the “courage to change the things I can” – i.e how will we choose our individuals and collective attitudes, perceptions and most importantly the ways in which we will treat each other?

Arrogance and denial are the hallmarks of addictive thinking and actions. As someone who can easily identify with both, I am also reminded of Shakespeare who also understood the sicker side of human nature quite well.

We are living an absurdist real-life version of the tragic tale of Othello. Remember that book from high school? The tale of the power-mongering villain Iago who uses an innocent man, Cassio “The Moor” to roil up King Othello’s insecurity. He convinces the King that Cassio and the king’s wife Desdemona have betrayed him, and that he must seek revenge. In the end, Othello kills his wife in a fit of jealous rage. Iago’s triumph is brief, as he is also executed at the end of the play.

In this nightmare analogy, Iago is Donald Trump (stirring the pot if mistrust, hate, misogyny and bigotry) against his useful instrument of Othello’s downfall, Cassio (played by… of course, President Obama). Iago’s job is to use clever language to play upon the arrogant and insecure king (who represents the American [mostly white male] public) who becomes convinced that his beloved Desdemona (who symbolizes our American country; our democratic values her feminine “virtue”- Trump will treat the our democracy the way he treats women) is being seduced by the King’s most trusted compatriot (the racism here rather literal, not analogous).

How does Iago win? By getting the arrogant and insecure King to destroy the wrong foe.  However, in the end, Iago does not win either. So perhaps there is hope for us, yet.

Arrogance and fear are the fuel of addicts and Americans everywhere it seems. Now we must face the remorse and regret for our folly of the “morning after”… we cannot undo what has been done. But we must also take action.

Our country’s addiction to hate and fear do not have to have the last word. 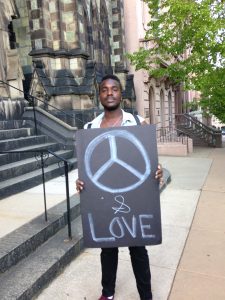 “Men in rage strike those that wish them best.”
― William Shakespeare, Othello