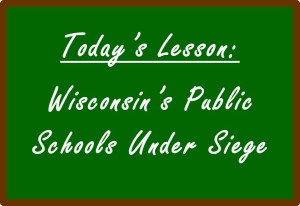 Before Christmas I posted an open letter to state senator Robin Voss and in that letter I proposed legislator accountability.  I received some positive feedback but not a single legislator (Republican or Democrat) drafted legislative language or even publicly acknowledged the idea.

At both AB #1 and SB #1 hearings multiple people provided testimony that pointed specifically to the legislature and that they— individuals that comprise the legislature—are the ones truly accountable to children in public schools.  The legislature creates the conditions in which public schools thrive or starve or simply suffer decades of purposeful neglect and budgetary torture.

Well, since nothing has happened on the legislator accountability front we now have another blatant piece of evidence—at least for education policy—that legislators must be held accountable for their constitutional responsibility to public schools.

The chief sponsor of the school accountability bill in the Assembly, Education Committee Chairman Rep. Jeremy Thiesfeldt, told The Associated Press on Thursday that he’s now looking at requiring failing schools to choose from a variety of sanctions.

And the rest of the story should read,

Immediately after putting forth this proposal Representative Thiesfeldt was sanctioned under the legislator accountability act that forbids legislators from introducing legislation funded by outside influences and has no basis in empirical research.

Instead, the story goes on to provide more details of the proposed sanctions.

Thiesfeldt said Thursday he’s going to propose that failing schools, after a period of years, be required to choose from three to five sanctions. Those could include forcing the school to convert into an independent charter, with the option of reverting back to a public school, and firing teachers and administrators, Thiesfeldt said. He said the particulars of the various options, including how many there will be, are still being discussed.

And now let’s move on to the details proposed by Theisfeldt.

Theisfeldt could have simply called me or one of thousands of professionals and asked about the validity of his proposal.  He obviously didn’t.  Therefore why is he not being being held accountable immediately for putting forth legislation that has the potential to harm fragile children and communities in legislatively neglected schools?