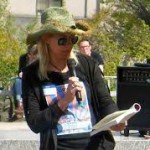 Morna McDermott has been working in, with, and around public schools for over twenty years. Currently she is a full professor at Towson University, in Maryland. Her scholarship and research interests focus on democracy, social justice, and arts-informed inquiry in K-post secondary educational settings, and working with beginning and experienced educators. Recent art work and installations have emphasized the value of art as a “public pedagogy” in creating grass roots social-political-educational change. She is author of The Left Handed Curriculum: Creative Experiences for Empowering Teachers (IAP, 2012), and a forthcoming novel entitled The Sacrament (Garn Press). She currently lives in Baltimore with her husband and two children.

We are in “Deep” Doo Doo: Latest Buzz Word of Caution

(By Morna McDermott) Here it is: DEEP LEARNING It’s something we can all start following/investigating. It’s a word… like GRIT, PERSONALIZED LEARNING, CHOICE, and 21st c LEARNING…words that are code for corporate colonization… meet “deep learning.” About Deeper Learning In a purely technical (near indecipherable) way, it can be defined: As a set of Machine… Read more »

Grit + Technology + Eugenics = A Recipe for Profit and Control

On the State of the Resistance Movement: Between Murder and Suicide and the Need to Claim a Third Space. By Morna McDermott

In May of 2016 I officially resigned as an administrator for United Opt Out a group I help create in 2011 along with Peggy Robertson, Tim Slekar, Ceresta Smith, Shaun Johnson, and Laurie Murphy. Since then, Shaun and Laurie rolled off, and we added new admins like Michael Pena, Rosemarie Jensen, Ruth Rodruigez and Denisha… Read more »

Reimagining EVERYTHING in education and hope for a “freedom from harm.” Guest: Maika Yeigh