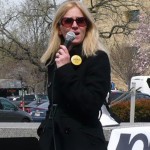 In his letter of nomination for Peggy Robertson, Ian Altman writes: “For as long as Peggy has worked with students and teachers, she has been a tireless and compassionate advocate for both.” Peggy has been a literacy coach and literacy interventionist at Jewell Elementary School in Aurora, Colorado. In this role, she has developed inquiry processes for students to pursue more self-directed learning. In addition, she has provided professional development for teachers including dialogue about reflective practices. Were this not enough, Peggy created the United Opt Out organization (www.unitedoptout.com) and, along with colleagues, built it into a national movement that has had demonstrable and newsworthy effects, leading to massive standardized test refusals in New York and many other states. In 2012, Peggy helped to lead a protest in Washington D.C. called “Occupy the DOE,” which called out politicians of both major parties for their reckless and uninformed support for policies that harm children. This advocacy work places Peggy at imminent risk of loss of job and livelihood, as her district’s administrators are no fans of her out-of-school activities. Her tireless commitment to children, parents, and teachers makes her well-deserving of this award.