Life is very short, and there’s no time
For fussing and fighting, my friend
I have always thought that it’s a crime,
So I will ask you once again
Try to see it my way…   -J. Lennon

This is going to be difficult, but here goes. I surrender. 45, and the wealthiest Cabinet ever are the best hope for our future. 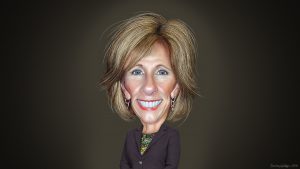 Now wait a minute; don’t stop reading. Let me explain. First of all, they won. You know who I mean. The 1%. It’s not just about them winning; it’s why they won. Let me be succinct: Science is on their side.

How ironic is that??? The very ones who seem to deny science at every turn, from climate change to creationism to gutting the EPA of scientific advisers are the benefactors and purveyors of Darwinism. In case you were distracted that day back in 10th grade biology class by a case of natural selection caused by the pheromones emanating from that fine human specimen sitting two seats in front of you, let’s review. In 1869, Charles Darwin, still cashing in on his observations taken some 30 years prior while riding around the world on a bark (barque) named for a dog (Get it?), used Herbert Spencer’s catchy phrase “Survival of the fittest” in his The Origin of the Species to title his theory of evolution.

In short, Chuck deduced that there simply are not enough resources available in our biosphere to sustain all the organisms born, hatched, or sprouted; therefore, we the living, must, by our very nature, become competitive to survive. It makes perfect sense, then, that in human societies, there are certain physical, social, and political qualities (let’s lump them all together and call them “capital”) that enable us to swim and if we lack these kinds of capital, we sink. An abundance of capital= survival; a lack of capital= well… you get the picture.

This is pure Darwinism, people! It’s theory backed up with empirical data and that equals science. To cling to some faith that we are all going to survive and thrive is tantamount to believing in Santa Claus. “Blessed are the poor, for they shall inherit the earth.” And how’s that been going for y’all? It’s a nice thought, but it’s not science. Not only is it true that the strong survive, it’s also true that the strong are adapt at passing that capital down to their offspring. Rich people beget rich people and poor people beget the rest of us.

The One Percenters are living proof. It’s not that 45 and his cabinet are selfish snobs who rob schools of resources or aim to kick tens of millions of Americans off health insurance. Nothing could be further from the truth. The truth is that they are realists who want nothing more than the survival of the species. They have been naturally selected and simply want nature to take its course.

Now, allow me to sum up (and I realize this not going to go over well, but it’s the truth). The rich get richer and the poor don’t, except for rare cases of mutation. 45 said it himself when questioned about all the millionaires and billionaires in his inner circle of advisers, cabinet secretaries, and policy makers : “… in those particular positions, I just don’t want a poor person… because that’s (not) the kind of thinking we want.” 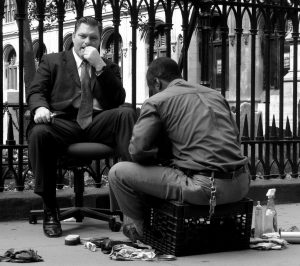 Therefore, according to science, it simply makes sense to allow nature to take its course and enact logical policies that benefit the strong and rich over the weak and poor. As Nevada Congressman, Cresent Hardy clearly insinuated: People with disabilities are a drain on society. In the oft-maligned words of Ebeneezer Scrooge, “…Let them die and decrease the surplus population.” Let me remind the reader that Scrooge was created in the very decade of the dawn of Darwinism and his ultimate transformation was based on pure fantasy rather than scientific logic. It is only now that our Republican leaders have had the courage to turn away from illogical, unnatural Christian dogma that sanctimoniously espouses poverty as a meritorious quality, as they recognize the science of natural selection. Let’s face facts, the poor are not going to inherit the earth, not now, not ever. To entertain such fallacy, we simply endanger the human species and weaken our progeny.

In reference to proposed cuts to federally funded school lunch and after-school programs, Mick Mulvaney, 45’s Office of Management and Budget Director argued that the government wouldn’t continue to fund “programs that cannot show that they actually deliver the promises that we’ve made to people.” To soft-hearted do-gooders and main-line Christians this sounds like a cruel gesture, but to science-minded naturalists and the Chosen who rightly reject the misguided War on Poverty as a drain on the fittest, it’s a step towards restoring science as the cornerstone of the future of the species.

I told you up front this was going to be difficult to digest, so let me end there to give you time to mull this over. Stay tuned for my next Blog as I explain why the maligned proposals of Betsy Devos and 45’s other billionaire lieutenants are actually the stuff of real science and the best chance of making America great again.

“They’ve been coaxed out of their mansions and off their yachts by President Trump to make America great again—for the very, very rich.” –ALEX FINE