Objects in Mirror are…

As lightning struck closer and closer, I looked to other parents who chatted casually on the sidelines. I felt almost embarrassed to be the one to raise the alarm as I sheepishly approached by daughter’s soccer coach and exclaimed as calmly as I could, “Coach, I think we need to get the girls off the field.” The coach looked up to the sky as if she hadn’t yet noticed its angry rumblings and blew her whistle.

What is it about our species that we gleefully tend to ignore the obvious warnings until we’re forced to act retroactively rather than proactively? Mark Twain might or might not have said, “History doesn’t repeat itself, but it often rhymes.”

Can the good old U.S. of A. last forever? I know, we don’t want to think about it, but if we do think about it, will we notice when storm clouds gather? How will we know when we’re bamboozled, when we’re being led right over the cliff? Empires do not last forever. How will we know when ours is near its end? What does history have to tell us about the ends of empires? 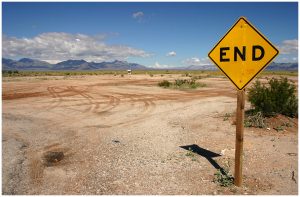 The denial and distorting of facts, or the fabrication of blatant lies might be considered the first sign of impending doom. Let’s be clear: We’re not talking about the outrageous promises every politician makes in the heat of the campaign. Nor are we talking about the “caught with hands in the cookie jar” lies that politicians try to make when, well… they get caught with their hands in the cookie jar. We’re talking about lies and misinformation that build a sense of grandeur, lies that overstate support and lay the foundation for dictatorial mandates. Such a politician might exaggerate the magnitude of his victory by thanking the electorate “for their overwhelming vote.” He probably would call it “one of the great victories of all time,” a “historic electoral landslide,” and a “massive landslide victory.” He might even proclaim that life is worse than it actually is. He might say the crime rate is rising or his political adversaries are criminals who need to be inordinately punished. He might even admire and emulate other demagogues who have succeeded with such strategies. Watch out when this happens because you can bet that he’s about to effect detrimental, self-serving policies and convince us all that he has our overwhelming blessing when, in fact, he does not. But when lies are repeated enough, we will begin to accept them as facts. Not only will we believe him, we’ll willingly want to make things happen that fulfill his wishes.

The second sign that our constitutional republic is endangered would be if the leader should turn public opinion against the press. If that should happen, that would be bad, very bad. The press, more than the courts or the legislature, are the ones who investigate the shenanigans of our politicians. History tells us demagogues fear the media and will use their pedestal to intimidate them by turning public opinion against them as soon as possible.

The third sign would be when the rising demagogue surrounds himself with clones of himself. In a constitutional republic, it is essential that the leader be informed by people as diverse as the general population. When all his advisers look, think, and talk like he does, watch out. Be even more wary should any of these advisers be of his family or wear uniforms. Sound familiar?

As the aspiring demagogue surrounds himself with admirers and fellow beneficiaries, he will probably choose a common enemy to unite the people. This is a trick as old as the first chieftain. Whom shall we be most easily led to fear, to distrust, to hate? Any ideas? It could be a religious group, it could be a socio-economic demographic, maybe people of a certain gender or sexual orientation, or it could be a racial entity. Maybe all of these. Any enemy of the dominant culture (not necessarily the most populous culture) will solidify power. If we were to check the history books, we would know that when these things happen, we should get worried.

Be particularly alert should the politicians in power work to limit who has the right or the ability to vote. If restrictions are placed upon people who do not look, act, or vote the way of those politicians, something rotten is already happening. It might be too late.

Watch out when the wannabe demagogues start playing with the plight of the workers. When they take away the right of workers to unionize and call that a “Right to Work,” when they promise to bring jobs back without a sophisticated acknowledgment of the complexities of contemporary markets, when they promise to protect domestic workers and pay them good wages but then hire foreign workers and buy products from foreign companies, it’s time to ask questions. A good place to begin would be to check out their tax returns, but unfortunately, such demagogues distain transparency.

Another sign would be when the aspiring demagogue starts denigrating scholars and academics. Like them or hate them, academics are the thinkers and truth-seekers. Their discussions, disagreements, and concordances are the discourses that framed our constitution and continue to interrogate its efficacy, its inclusiveness, its justice, and its compassion in an evolving sovereign state. They are an oligarch’s thorn-in-the-side, and should our leaders succeed in undermining their free and open dialogues, the constitutional democratic republic will already be in a downward spiral.

And perhaps most importantly, we need to be very suspicious when they take schools out of the public domain and hand them over to private enterprises. It would be an egregious attack on our democratic republic should these private enterprises take over the training and assessment of teachers and force them to use pre-scripted lessons that standardize the minds of students. If this should happen, you can be assured that democracy is being systematically strangled. It is critical for a fascist state or oligarchy to control the minds of the youth. We need to be vigilant when parents of school children are told they are being offered a “choice” and that by exercising “choice” they are providing a better future for their children, especially when the facts say otherwise. If this should happen, look to the sky and see if it’s time to get off the field.

This brings us full circle. It seems we’ve heard about these things before… rhymes with… 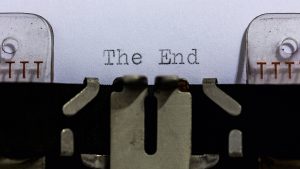 (I acknowledge Timothy Snyder of Yale University whose work inspired this post.)