Amidst all the furor (Did I spell that right?), the derisive snickering, and those silly pink cat hats that surrounded the water coolers during these first few days of the new administration, it went virtually unnoticed that the Trump administration’s greatest triumph thus far is the end of the Achievement Gap.

It’s sooooo over. Over.

What? You missed it? The solution was nothing short of a stroke of genius and best of all, it will cost absolutely nothing to implement. Nothing. Even the Mexicans are off the hook.

It requires no new legislation, no rewriting of standardized tests, and no skillfully crafted executive order.

You can keep all those standardized tests if you feel like it, or throw them all in the trash. It doesn’t matter. The Achievement Gap is dead. You can come out from under your desk now.

For all of you who somehow missed President Trump’s presidential adviser, Kellyanne Conway, talking to Chuck Todd, host of NBC’s Meet the Press, the conversation quickly turned to White House Communications Director, Sean Spicer.  Chuck asserted that Spicer flunked his first test as White House press secretary when he greatly overstated the size of the crowd on the Washington Mall during President Trump’s inauguration speech. With more than a bit of righteous indignation on behalf of journalists everywhere, Chuck pointed out that there was sufficient evidence to find Spicer’s assertions dead wrong.

Chuck must have missed the memo that all of our wrongs have been righted. America is great again! 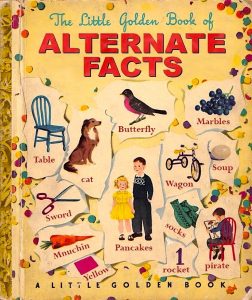 Conway’s response will go down in history as an authentic display of the high-level thinking skills and Orwellian scholarship of the newly baptized Trump administration. There will certainly be more to come.

Alternative facts. That’s right. Every question has an alternate answer; we just haven’t realized this before due to questions that were so “unbelievably dishonest,”  asked by disgusting “sleaze,” and “scum.”

From now on, there will be no wrong responses to test questions, only alternative answers. Here’s an example:

“If Darren had six apples and gave three to Samantha, how many would he have left?”

While the answer might appear to some of the most despicable liars to be three, the alternative answer is clearly five (or whatever number comes to mind).

Alternative explanation: Darren might have given Samantha only one of his own apples and two of Tabitha’s apples. Or, maybe a serpent came by and distributed a whole s#%t load of apples as serpents are wont to do. As anyone can see, this means that any answer the test-taker recorded on his or her computer would have to be accepted as an “alternative fact;” it’s impossible to prove him/her wrong. (While we’re at it… Do we still have to be politically correct with our grammar. It’s time for this “him/her” and “his or her” crap to go. And what’s up with this “they” nonsense? Let’s just go back to when America was great, when every singular pronoun was male, as God intended. And if that’s not true, prove it!)

Alternative facts! What kind of person comes up with things like that? Is Conway a genius or what?

Think of the financial savings all thanks to one little verbal exchange on Meet the Press. Title One… gone. Title Nine… gone. The Individuals with Disabilities Education Act (IDEA)… history. IEPs, 504’s… why bother? It boggles the mind!

And those are just the educational savings. Think of the policy implications for state and federal agencies. EPA… Drill Baby, Drill!  Climate change?… Never heard of it!

Employment statistics? Debt? Distribution of wealth? Tax returns?… Who cares? “…as long as we believe in ourselves, and our country, there is nothing we cannot accomplish” (-from the greatest inauguration speech ever).

This conversation is over. Period.