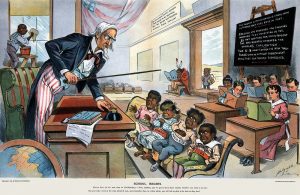 Over the years I have done significant research on the achievement gap between some racial minorities and white students in American schools.  All the journals, books and articles I read were limited to American publications.  This only gives a limited view of the problem.  I thought it would be wise to look at the situation in other countries with a similar history of conquest, genocide and codified racism.

America is historically a white, colonial, settler state, meaning Europeans came, conquered, cleared the place out and established a racial hierarchy with them at the top. A mainstay of American culture has been a belief in white, intellectual and cultural supremacy over the indigenous people and Africans. These are some of the same people under-performing in America’s schools today.

There are other societies that have historical commonalities with America.  It seems as if white supremacist, colonial, settler states have the same discrepancies that grow out of this similar history. Indigenous Hawaiians, Aboriginal Australians, South Africans, Maori from New Zealand and Indigenous and African people throughout the Americas under-perform compared to white students in their respective societies.

The oppressed populations are also economically depressed and fill the prisons, similar to African and Native Americans in the US. Perhaps the problem is not the students of certain oppressed ethnic and racial backgrounds, but the societies that were built on their backs. All these societies have histories of white supremacy and institutionalized inferiority of oppressed people that were consciously fabricated by the ruling group; thus, the achievement gap is a normal function of the society. It’s a legacy of educational imperialism, if you will.

We are expecting students of oppressed groups to fully engage and buy into the system created by their conquerors.  This is a gap that may not ever be bridged under the current social relations. Out of that gap grows resentment, misbehavior, distrust, apathy and under-performance. These are defense mechanisms against what may be argued, is a hostile system.

What does it suggest if this achievement gap did not exist and students performed at or above the level of the colonizing culture under their educational system. It may suggest that they have completely bought in to the perspective of the ruling class and have ceased to resist. This is not the case and should never be.  Education has always been a tool of conquest and should not be assumed neutral. It is the system that needs to be changed and people have to do it.

The similarities do not end with education.  Look inside the prisons in these societies. The oppressed groups make up disproportionate percentages there as well. There is a trend here and it’s not surprising. The historically dispossessed are still just that, dispossessed, just in a different form. Much of the rhetoric coming from the ruling classes in those societies mirror that of the US. They also have a history of blaming the conquered people for their lack of upward mobility.

There are attacks on their culture, their self-destructive behavior, propensity for criminality, antisocial behavior and apathy as if it is totally unrelated to their complicated history with white settler colonialism, enslavement, genocide and capitalism. Surprise! People that have had their land, culture, labor and language debased in the most violent and oppressive manner do not adjust very well or very quickly to the institutions that were built on top of them.

People often look at the educational success of immigrant groups in the United States to highlight the low performance of African Americans.  “If they can come here with nothing and succeed at the highest levels in America’s schools and universities, what’s wrong with these African Americans?” It is interesting to note, the most educated immigrant group here in America is Africans, particularly Nigerians. They spring from the same gene pool as African Americans, but they come here without much of the cultural baggage and inferiority complex that Africans in this hemisphere have developed.

On the other hand, the cultural context that reared their cousins in the Americas taught them that they were deficient, many internalized it to varying degrees over the centuries. The socio-cultural institutions that maintain a people’s self esteem have been compromised if not destroyed. New institutions have developed in their place, but in the context of race and class oppression. This is at the root of the achievement gap. This is what needs to be rebuilt.

Critics postulate and pontificate about the dysfunction in African American culture. They decry the lack of fathers in the home, the predominance of drugs and violence in their communities as if they just fell into that situation. Those problems did not exist when they were taken from their homeland in chains. The condition that oppressed people all over the world find themselves in grows out of their historical experience with their oppressors. It is then, the very inheritors of the fruit of this legacy, that then turn and criticize those they have dispossessed.

Educational Gaps Can’t be Closed in Isolation from General Struggle

In most situations, the ruling class and their allies from the oppressed groups fail to see why these people they did so much to civilize and educate cannot properly function in their society with all the opportunity they have been given. Well maybe ‘those people’ don’t see it the same way. Perhaps their pronounced levels of inter-generational trauma, self loathing, lack of confidence and resentment that was involuntarily piled upon them for centuries has something to do with their failure to succeed in that same system. Perhaps this is because those institutions do not grow organically from them, but were imposed. The problems faced by the oppressed cannot be fixed in the context of the oppressing system.

In recent years, there has been some attempt to include oppressed people in the curriculum and mask the cultural disdain of the ruling institutions towards them as well as programs to help them out. The gaps remain and they will as long as education is rooted in the larger hierarchical system. It takes more than piecemeal educational or community programs that focus on isolated issues to close achievement gaps created and maintained by capitalism and white supremacy over centuries.

The closing of these gaps in the context of the ruling system could in fact indicate a capitulation by the oppressed, a full acceptance of the system. These discrepancies do not only represent a history of oppression but a history of resistance that must continue and intensify if the poor and oppressed are to live with dignity, these institutions have to be rejected at some level. The school has to be a point of struggle.

It is there, that the students must challenge the authoritarian structure and cultural hegemony inherent in school and society. The oppressed must lay claim to education. If they are to do so, it is impossible to do it in isolation. They must lay claim to education along with everything else. If not, any progress on this front or any other is simply a concession made in the interests of the ruling class that can be reversed.

Educational equity in America or anywhere else must not come from an acquiescence to the system or acceptance of it. It should come from a larger change in society in which new, revolutionary institutions have replaced the traditional oppressive ones. Institutions like education generally mirror the social relations around them.

Thus, equity in education has to be part of a general awakening of the people that challenges the status quo and fundamentally changes society. Education is not an island. We cannot have a society with a strong legacy of colonialism, slavery, genocide, oppression, and inequality and expect to be able to have an educational system without the same baggage.

The Role of Critical Education

Our students must be positioned to recognize the cultural baggage that they bring as well as the baggage inherent in the system and challenge them both. The intellectual challenge should eventually give way to outward manifestations of resistance. This is where critical education is necessary, to provide the intellectual impetus to awaken students to the world and their place in it. Hopefully some eventually take it and run with it, applying practice to theory.

I have seen this happen as student’s consciousness rise to a level that action is necessary. In recent years, we have seen high school students walk out of school in response to police brutality in the community and the nation.  College students have stood up against racism on campus, forced the resignation of administrators and even a  student athlete strike. Latino students walked out of school all over Los Angeles as part of the immigration protests of 2006. These activities don’t just take place, they happen as part of a general upsurge in society that must intensify to make fundamental change. We must assist students to see their place in history and act on it as agents of their own liberation.

The changes we want to see in education, we should be working for in the larger societal context. Let us not limit our focus to equity in schools, but to building a society that values its children equally. This calls for a radical restructuring of, well, everything from our economy to our culture and challenging the reactionary forces that benefit from the status quo. Of course this challenge must come, in part, from the youth, students in particular. Our part as critical educators is assisting the students to read the world and their place in it and helping them to envision an alternative.