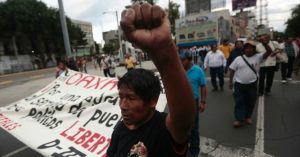 Mexican teachers in the poor, heavily indigenous states of Oaxaca, Guerrero, and Michoacan have bravely stood up in the face of government attempts to smash one of the last bastions of unionized workers in Mexico, education. The Oaxaca teacher’s strike is in response to the so-called educational reforms being pushed by the Enrique Pena Nieto government. These are not educational reforms at all but labor reforms. One of the more controversial elements of these reforms is that teachers will be subject to evaluations upon which their jobs depend. The teacher training schools or normals are also being threatened, especially since the disappearance of 43 students from the Ayotzinapa Normal school.

The normal have been a pathway to employment for the impoverished as well as a source of political activity and community involvement in rural societies. In response, the teacher’s union, Coordinadora Nacional de Trabajadores de la Educación went on strike in Oaxaca. The ensuing crackdown on the Oaxaca teacher’s strike and imprisonment of  (CNTE) leaders Aciel Sibaja, Ruben Nunez and Francisco Villalobos and brutal slaying of at least 4 demonstrators on June 19th illustrates the desperation of the Mexican government to contain and silence the teacher’s union.

American teachers should stand in solidarity with the CNTE and the Oaxaca teacher’s strike, as we are fighting the same set of neoliberal, corporate, interests in our system of education here in America. Our government is an ally of Pena Nieto. They have stood by and supported him in the face of his government’s violence, repression and human rights violations. There has been relative silence about the latest atrocities because they support the same vision of education. If faced with the same political clarity and courage exhibited by the Mexican teachers, our ruling class may respond in kind with repression. American teacher’s unions should demand an end to aid to the Mexican government until the CNTE confirms that the repression has stopped. Our struggle is the same.

We educators, here in the US are facing the same agenda, top down reforms in which our voices have not been included, increased, arbitrary accountability and job insecurity to fit a business model of education. The CNTE should inspire us all to stand up. We do not honor their example and their struggle by simply well wishing and liking facebook statuses. We should support them by supporting ourselves, standing up to the corporate education agenda here at home. Unions should demand our government end the political and financial support of the Pena Nieto government.

The reforms being pushed on us are similar to the ones faced in Mexico. Teacher evaluations are highly subjective and of course we are never asked for our input on how they are carried out. This is thinly veiled coercion to “play ball” with administration. Different conditions in our communities are not taken into account. The teachers in poor, indigenous Mexican communities have an effect on those students and they have struggles that cannot be captured in a test. This is similar to us that work in poor communities with high levels of poverty, non native English speakers and other issues that are not universally present especially in middle class communities. The purpose of increased tests and accountability is not simply to hold teachers accountable but to take power from the union.

Mexican educators have a long history of progressive and even radical subversion within a larger context of subservience to institutions of power. The ideological constructs that bolster ruling class ideas has shown signs of decay. They are being threatened by the normal school system in which educators often become advocates for justice instead of custodians for the system in the communities they serve. In response, the Mexican government will allow anyone with a degree to teach, allowing them to bypass the normals. This is bigger than an educational issue. The Oaxaca teacher’s strike represents an issue of legitimacy and ideological control for the Mexican ruling class. There is a lot at stake if the power structure loses ideological control of the educational system.

A class system is only as democratic as it can afford to be in order for the bourgeoisie to maintain power. It is the job of the critical educator to subvert the ideological monopoly of the ruling class. This is the tradition of the normal schools. The threat of the schools playing a positive role in people’s movements in poor communities is a daunting one for the ruling class. The possibility exists that educators can take up the cause of the oppressed, just as the Latin American clergy did in the movements of the 70’s and 80’s. With that possibility and actual movement towards it comes the inevitable repression. The state resorts to violence when they cannot use other means to coerce.

The brutality being exhibited by the Mexican government is a sign that there is a bubbling social movement from below in which the CNTE is involved. The repression of the Oaxaca teacher’s strike is meant to serve as a deterrent to more activism. We hope the repression will embolden instead of suppress the movement. We in the states should support them as they are fighting an onslaught against teacher’s unions by the business class just as we are. We owe it to them who face guns and risk their lives over the fate of their schools, their profession and their future to struggle in solidarity with them. What excuse to we have, not even facing a modicum of the repression faced by teachers in Mexico, not to take up the same fight? This may be a harbinger of things to come if we do not act.