At first I thought it was just a stupid idea and a continuation of accountability schemes that do nothing but punish students, teachers , and schools. A good reason to start a new opt out movement.

Then after some reflection it became obvious—this test was not just one more useless test.  It was an imposition on the freedom to learn a diverse social studies curriculum. In fact, it would promote European dominance and sideline any courses or requirements to help our students understand the rich diversity of historical narratives that make up the American story—state mandated racism by omission.

This legislative session has seen a flurry of bills related to civic education. Most of these bills have grown out of the efforts of the Civics Education Initiative, a project of the Joe Foss Institute. The goal of this initiative is to have all states establish the requirement that students pass a 100-question test on basic history and civic facts to graduate from high school. 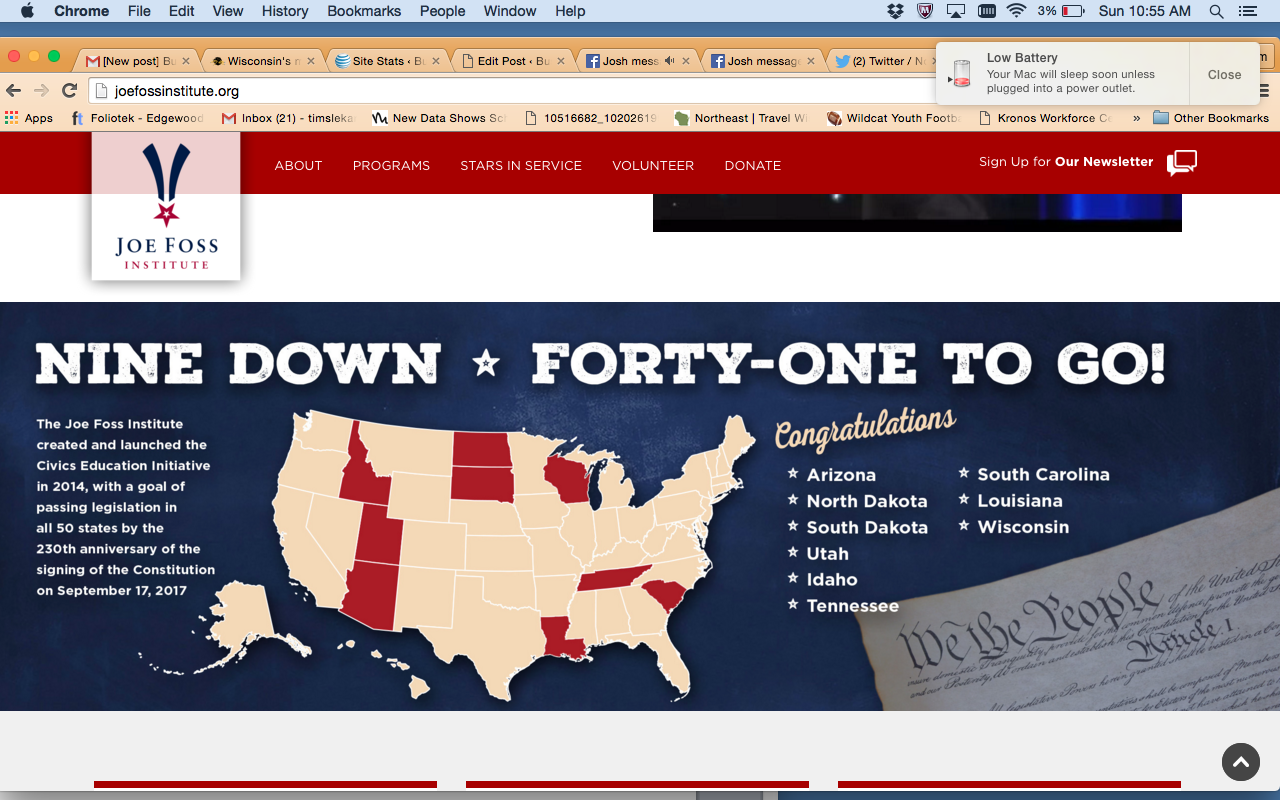 What’s the problem Tim?  So what if Jimmy Boy doesn’t really have any of his own good ideas?  There’s nothing wrong with Wisconsin students knowing American Civics and learning to be patriotic! Maybe. Maybe not. However—as a first level practitioner of American civics—Representative Edming, before thwarting democracy, should have let THE PEOPLE know that requiring a mandatory civics test was the agenda of an extremely well funded right wing institute.  The people of Wisconsin should have had a chance to debate the need for government funded right-wing patriotic propaganda being mandated by the state.  It’s one thing to talk about the lack of so called civic knowledge. It’s an outrageous thing when only one version of civics—obedience and blind patriotism—is mandated by oligarchic pawns.

What about mandated culturally relevant curricula and ethnic studies?  Why perpetuate the divisive story of American exceptionalism when research clearly shows more promise in engaging students in critical history and ethnically centered curricula?

The answer is simple: What works in empowering citizens to take action was never and is still not the purpose of a mandatory civics test.

Horne and his replacement, John Huppenthal, tried with puzzling ferocity to squelch Mexican American studies. The bill designed to eradicate the course said the program taught Latino students to hate other races and that they’d been historically subjugated and mistreated by the government, and that it even encouraged sedition.

After the banning of ethnic studies in Arizona, John Huppenthal introduced the new “American Heritage – Arizona Centennial Initiative.”  The initiative’s stated purpose was “to strengthen our students’ civic literacy as American citizens and learn about Arizona’s unique heritage” and was commended by the Joe Foss Institiute.

The Joe Foss Institute is proud to be a part of this initiative, …. Our goal through this program and our online curriculum is to assist educators in teaching the basic foundation of how our government works and an appreciation for the uniqueness of our freedoms…. This exciting American Heritage – Arizona Centennial Initiative is a tremendous opportunity to create civic pride in our young people – and teach them the valuable lesson of giving back since they are the future! I applaud Superintendent Huppenthal for this initiative….

By 2015 Arizona had become to first state to mandate the Joe Foss Institute’s call for a high stakes test in the form of an American Civics test.

Wisconsin is the 9th state in the country to mandate a high stakes civics test for graduation.  The idea for this mandate is the direct result of the racist elimination of the ethnic studies curricula in Arizona and an ideology that believes in blind and obedient patriotism.  Students is Wisconsin are the victims of a paranoid contingency of right wing alarmists that fear a truly educated electorate.