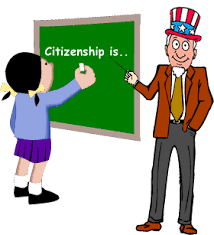 Quick Fact. In the Spring, Representative James “Jimmy Boy” Edming slipped into the Wisconsin budget (without debate or public commentary) a provision that requires all students attending public schools to pass a Civics test in order to graduate from High School.  According to Representative Edming it seemed like a”good idea” and would “help instill the responsibilities of citizenship.”

It’s now November and as a parent of a 10th-grade Wisconsin public school student I recently received a letter from my son’s school informing us that “successful completion of this exam will be required for graduation.”

Oh well what are you going to do?

I don’t know about all of you but as a social studies scholar and advocate for participatory citizenship I plan on challenging this disaster of a “good idea.”

So to enlist some support I visited the website for the Wisconsin Council for the Social Studies (WCSS).  I figured that since the mission of the National Council of Social Studies (NCSS) was to develop the “civic values necessary for fulfilling the duties of citizenship in a participatory democracy” the Wisconsin Chapter would be a good starting point. In fact according to the WCSS website their mission is to “help young people develop the ability to make informed and reasoned decisions for the public good as citizens of a culturally diverse, democratic society in an interdependent world.”  “Nice” I thought to myself.

However, it wasn’t long before I found myself reading the WISCONSIN STATE CIVICS TEST GRADUATION REQUIREMENT.   This was simply a page (On the WCSS website) dedicated to presenting the “facts” about Representative Edming’s “good idea.”  There was not a single mention of the problematic nature of requiring a graduation exit exam. And nothing—nothing about the fact that passing this test does NOT even increase voting among people who pass the test.  I was shocked.

How could an organization committed to “participatory democracy” simply be neutral?  Where was the disclaimer statement about the fact that the organization does not condone the use of high stakes tests?  Where was any mention of the problematic nature surrounding the cultural insensitivities that are promoted by this test?  I couldn’t find them.  So I wrote and sent the email posted below.

As a past NCSS member and CUFA member, …. I am seriously wondering how WCSS could support such a blatant attempt to undermine real learning in social studies and participatory citizenship?

Also, the research is absolutely clear—high stakes graduation exit exams increase the drop out rate and decrease the graduation rate.

It (the civics test) is an invalid assessment that is intrusive and not part of the curriculum. In fact, it is a culturally biased tool that supports a white European supremacy mentality. Valuable instruction time for the social studies—that has been decimated over the last 20 years—will now be used in an attempt to increase trivial knowledge that has no connection to empowering students to be active and critical citizens in a democracy.

If the WCSS really supported the social studies it would do its part and call for a statewide opt out and test refusal.

Try being a civic model for the students of Wisconsin instead of the tool of a corrupt state legislature that had no business mandating such a culturally insensitive and educationally invaluable graduation requirement.

Yes I did get a response. And the response was (paraphrasing),

And there you have it.  The one organization that is devoted to developing active, informed and participatory citizens is at best neutral, and at worst, antagonistic towards civil disobedience when it comes to doing what’s best for children.

So much for support from the Wisconsin Council for the Social Studies.

I guess it’s up to me and other brave citizens willing to fight this insanity masquerading as a “good idea.”

Therefore, my son will not successfully complete the Civics Exam for graduation! Why?

Or what about a compromise?

My son will take the civics test when Representative James Edming and all of our other state elected officials take the same test and publicly publish their scores.  I want proof that all of those responsible for meddling with the graduation prospects of Wisconsin’s children are they themselves worthy of graduation from Wisconsin public schools.

The people and the children of the state of Wisconsin have a right to know if their elected leaders are proficient in their knowledge of American Civics.  And I do not want any excuses like “I already graduated from high school.”  Too bad.  If all of our children have to prove their civic competency by taking a high stakes test then so do our elected representatives.