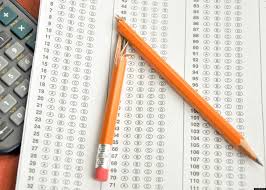 Yes, read it again if you need to, but it was announced yesterday that the state of Wisconsin has picked a new standardized test to be used this Spring to take the place of the defunded Badger exam.

In other words, people with political connections helped a certain company—that donated money to politicians and DPI—land a $63 million dollar contract to continue the test and punish educational malpractice that has harmed kids, teachers, schools and their communities.

Yes. Lets really go there because I’m sick of writing, talking and shouting about the fact that eugenics influenced standardized testing will never close the “achievement gap!” A “new” standardized test will only provide data that reassures us that the gap between urban blacks and minorities and suburban whites is firmly entrenched.  That’s it.

Our political and education leaders have sold out the kids, teachers, and schools of Wisconsin again.  Instead of investing in books, blankets, and reduced class sizes, taxpayers will fork out $63 million dollars for a test that will tell us what we already know—years of racism, segregation, poverty and trauma have stolen the opportunities from our neighbors’ kids.  These stolen opportunities are the real cause of the achievement gap.

What I want to know is when are we finally going to hold our leaders accountable for educational malpractice?  When are we going to force the media to do their job and ask the questions that expose this nonsense as a simple transfer of wealth away from the kids in our neediest communities?

Let’s be honest: One more test simply continues the oppression and only provides cover for elected officials and complicit educators who fail to advocate for educational justice.