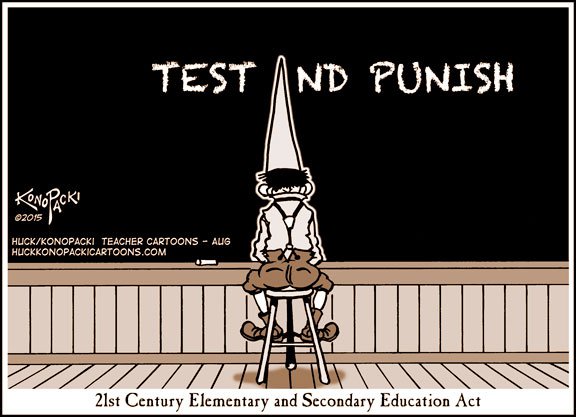 The Elementary and Secondary Education Act was passed in 1965 as one of the pillars of the War on Poverty and was a major progressive victory.  It recognized that inequitable funding of our public schools created disastrous learning conditions for children and families in poverty.  Therefore this simple piece of legislation attempted to equalize school funding across the country in an effort to help public schools serve all of America’s children.

Now let me state this very clearly.  If the Every Child Achieves Act (ECAA) passed in the Senate and the Student Success Act (SSA) passed in the House are reconciled and reauthorized as the new Elementary and Secondary Education Act (ESEA) harmful neo-liberal school reform will continue and open season will be declared on public education in Wisconsin.

Yes.  It is that simple.

For the last six years Wisconsin Republicans—funded by the Koch family, the DeVos family, the Walton family, and I’m sure an anonymous list of thousands of other fascist leaning donors—have waged war on public schools, public school teachers, and public school children.

The ability to wage a merciless war on public education has it roots in a simple yet pernicious system—test based accountability as prescribed by No Child Left Behind (NCLB).  NCLB was the radical reauthorization of ESEA under president George W. Bush. NCLB ended the War on Poverty and ushered in the War on Children, Teachers, and Public Schools.

And that is the problem if you live in Wisconsin—or any other state that is controlled by fascist leaning, fully financed politicians that are hell bent on making sure that our system of public education is fully privatized.

See it doesn’t really matter if the “power” shifts to the state. When the state is a corrupt oligarchy that only see’s public schools as untapped profit machines or as warehouses for disposable workers and the prison industrial complex why would anybody celebrate the pending ESEA reauthorization as progress?

There is nothing progressive about federally or state mandated test-based accountability. Implemented at either level, it continues the dismantling of our public schools and rejects our collective responsibility to at least dull the edges of poverty—at a minimum— so that all children have a chance to experience a liberating education and become active and critical citizens in our fragile democracy.