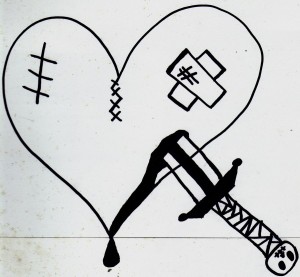 MADISON, Wis. (AP) – Wisconsin public schools deemed to be failing would have to become charter schools under a bill introduced Wednesday that was the first of the 2015 legislative session and placed on the fast track for passage.

What else needs to be said?

Crawling in my skin
These wounds they will not heal

Yep. Those two simple lines manage to capture just about every emotion I am experiencing at this moment. It’s kind of weird though. I mean it’s not like this is a surprise. In fact, I have been playing my role as Chicken Little for the last 12 years and a simple acknowledgement from some who are somewhat sympathetic has always been enough to keep me going. But now what?

Look if you haven’t read the AP report linked to this post then please go back a do so. And if the AP report doesn’t do it for you ask me and I’ll send you the actual bill.

Republicans and their ALEC funded lobbyists have finally created a penal system introduced a bill that destroys the hearts of our communities—our public schools. Seriously! Wisconsin Republicans are pushing forward yet another deeply flawed accountability system that when fully realized REQUIRES the state to get rid of OUR public schools. It’s that simple. No more Friday night football. No more first kisses under the bleachers. No more proms. No more kindergarten Halloween parades. No more community based public schools.

Hell, if you think it’s not possible just look at York, PA. The city of York is about to lose its local community schools to a private charter school chain that’s run out of Florida. The York school board is being dissolved as I write this post.

And for those that are going to be quick to point out the little parts of this bill “that aren’t that bad”—get a clue. There is no safe level of increased ingestion of arsenic. Therefore there is also no safe level of politician involvement in school reform. In the end the result is the same.